You are here: Home / Travel / Europe / Croatia / Split Old Town: Everything You’ll Ever Want To Know

The Old Town in Split, Croatia is unlike anything I’ve ever seen. Within its walls, the UNESCO World Heritage Site still houses museums, cafés, shops, and residential areas. Yes, Croatian people still live in and among the ancient palace that makes up most of the Split Old Town.

I’ve had the incredible opportunity of staying with a local family just outside of Old Town for two entire summers, and it’s become one of my favorite places in the world. Early morning, late afternoon, or into the night, wandering around this incredible ancient area filled with historic buildings is an incredible experience. No wonder the popular HBO show Game of Thrones used the Palace for on-location filming!

When is the best time to visit the Old Town in Split, Croatia?

If you want to have the best photo spots in Split to yourself, I recommend you go to the city center early in the day, before most people are up and walking around. Make the most of those sunshine hours! The city is just as beautiful at night though, so make sure you explore the Old Town in Split Croatia throughout the day.

Learn More On A Tour

If you’re interested in learning more about the history of Diocletian’s Palace when you’re on location, there are several amazing walking tours around the city, where local guides will dive into detail on the history of the prominent city. Split also has a wide range of beautiful beaches and popular day tours. You can check out my itinerary to 3 days in Split, my ultimate guide to things to do in Split, and my list of the best day trips from Split.

The Old Town in Split, Croatia

Diocletian’s Palace, located in the heart of modern-day Split, Croatia, is essentially the city’s Old Town. It’s a significant representation of Ancient Roman architecture on the city’s coastline, displaying the civilization’s immense strength and wealth.

Built near Diocletian’s birthplace, Spalatum, the enormous building was erected in the 4th century by Roman Emperor Diocletian as his home to retire from public duties in 305 A.D. But, he only lived here for less than a decade before being assassinated.

The UNESCO-listed Diocletian’s Palace complex housed everything–the royal palace, the baths, the crypt, the temples, and even the town square. Several of these sites are still standing within the Palace today and are essential to add to your 3 days in Split itinerary.

Located right in the center of Diocletian’s Palace, the Cathedral and Bell Tower of Saint Domnius is one of the best-preserved examples of Roman architecture that still exists today. The oldest Catholic church in the world is still operating in its original form.

Quick History: Diocletian is considered one of the last famous Christian persecutors, and Saint Domnius is one of the people that was martyred under his reign. When Christians overtook Split, they destroyed Diocletian’s sarcophagus and transformed his tomb into the church.

Make sure you take an opportunity to see inside the Catholic cathedral and visit the crypt and the treasury before climbing the bell tower. There are several striking pieces of art and literature inside, including relics of Saint Dominus himself.

Since it’s right in the center of the city, the bell tower has some beautiful views from within Split. There’s no elevator, and the stairs are pretty narrow, so be careful on your climb to the top. You’ll need to purchase separate tickets to visit the bell tower and the Cathedral, but your Cathedral ticket also includes your entry into the Temple of Jupiter.

During the off-season, the Treasury is closed to the public.

Originally dedicated to the Ancient Roman king of the gods, the Temple of Jupiter was never entirely completed because when Diocletian moved into the palace, construction on the Temple stopped and never resumed. The temple has beautiful carvings of other Roman gods above its entrance and a headless Ancient Egyptian sphinx guarding the door that was brought to this one of the ancient places in Europe by Diocletian.

The temple was later converted into a Christian Baptistry dedicated to Saint John. Inside, you can find a bronze statue of the saint by Ivan Meštrović (where there was once a statue of Jupiter) and the relics of two Archbishops of Split.

The inside of the Temple of Jupiter/the Baptistery of St. John is pretty small, so it’s easy to add it onto your list of things to do in Split for the day after seeing inside the Cathedral.

Right outside the entrance to the Cathedral of Saint Dominus, you’ll find yourself in the Peristyle. This kind of open inner courtyard was very popular in Roman architecture, which is why you’ll find one in what was once a retired Roman king’s home!

Depending on the time of day you visit the Peristyle, you can catch historical reenactments of different public events, like proclamations (which I saw during the day) and duels (which I saw at night.) The Peristyle is also used as a performance space for concerts, operas, and other performances.

Connected to the Peristyle, the Vestibule is a large, round hall formerly used as the meeting hall and formal entrance into the Palace’s apartments. Only the most important ambassadors were received in this entryway. There are also four naves along its circular walls that once held statutes dedicated to Roman deities.

Today, you can walk through the Vestibule and catch a glimpse of the top of the Bell Tower. Or climb on top of the Vestibule to look down inside. This is also where you can find my favorite, unobstructed view of the Cathedral and Bell Tower of Saint Domnius.

Beneath Diocletian’s Palace, in the space that was once a prison (and a septic tank so filled with sewage that it actually helped preserve the area,) you’ll now find the Podrum Underground Market.

Wander through the stalls in the main hallway, filled with local artisans and souvenir stands. You can use either the entrance on the Riva or underneath the Peristyle to access the market.

Enter the city through one of its ancient gates

None of the best palaces in Europe are complete without grand entrances. In this case, Diocletian’s Palace has four–the Golden Gate, the Silver Gate, the Bronze Gate, and the Iron Gate. Each faces a different direction and served a distinct purpose for the Romans.

Imagine, each of Split’s ancient gates used to be built into huge walls that completely encompassed Diocletian’s Palace. The lower levels of the walls had no openings, while the upper parts had large arches where watchers could see the surrounding lands.

Although Split’s city walls aren’t still fully intact–like the southern Dalmatian city Dubrovnik–there are areas of the ancient walls that can be explored! The section above the Riva is really cool to walk around. You’re literally walking above the pedestrian boulevard, and you can see the Adriatic coast through the open-air arches.

If you’re looking for more things to do in Split Old Town, the entrance into the Ethnographic Museum is also up there along the palace walls. You can easily spend a couple of hours exploring everything there!

Fun Fact: One of the oldest synagogues in the world is found in Split, too. One of the oldest in continual use worldwide is tucked away in a residential building built into the Palace’s western wall. Walk down the narrow Židovski Prolaz–which translates to Jewish Passage–to find the 16th-century Sephardic synagogue.

The seafront promenade runs outside the outside wall of Diocletian’s Palace. When the palace was first built, this was actually underwater–the Bronze Gate used to lead out directly to the Adriatic Sea for boats that needed to dock before entering the palace.

Now, as you walk down the Riva you’ll pass several coffee shops, cafés, and ice cream vendors, along with breathtaking views of the sea. As great as the Riva is during the day, the best time to see it is at night! You’ll find nightclubs, bars, and performances on stages scattered throughout the boulevard.

If you’ve ever visited Piazza di San Marco in Venice, Italy, you might recognize some similarities. Also known as the Prokurative, Republic Square is found at the western end of the Riva. Taking its inspiration from the famous Italian piazza, buildings enclose the square on three sides. It’s a great space to relax with a coffee or catch an outdoor performance.

Around the 13th century, Pjaca Square, or the People’s Square, was the first area to be populated outside of the palace. As the city continued to grow outside the walls of Diocletian’s Palace, it became known as Split’s main square.

There are a few other notable landmarks that line its sides:

Church of Our Lady of the Bell Tower

Built between the 6th and 11th centuries, this structure was originally for guards working in the Iron Gate. Later, the Bell Tower was built above the corridor and is one of the oldest preserved early Romanesque bell towers on Croatia’s coastline.

Designed by Spiro Nakić at the turn of the 20th century, this early Art Nouveau style construction is reminiscent of buildings found in Vienna, Austria–where the architect studied. Pop by Znanje Split bookstore on the first floor, or stay on the upper floors’ Central Square Heritage Hotel (Booking | Hotels) for an inside look at this UNESCO-protected building.

This beautiful building with the three Gothic-style arches served as the city’s Town Hall. It was constructed in the 13th century in the Romanesque-Gothic style but partially renovated to the neo-Gothic style during the mid-19th century. Make sure you stop inside to visit one of their temporary exhibitions.

Even though it’s technically outside of the Old Town, it still has ancient relevance! Marjan Hill is the highest point in the city. After climbing up a massive set of stairs in the Varoš neighborhood, you’ll be rewarded with an incredible view of the city, Old Town Split, and the Adriatic Sea.

As you walk through Marjan Park, you might come across one of the twelve tiny Medieval chapels dotting the hillside, where faithful Medieval Split citizens would come for worship. Or, even Prirodoslovni muzej i zoološki vrt, Split’s Natural History Museum and Zoo.

What places will you explore in the Old Town in Split, Croatia? 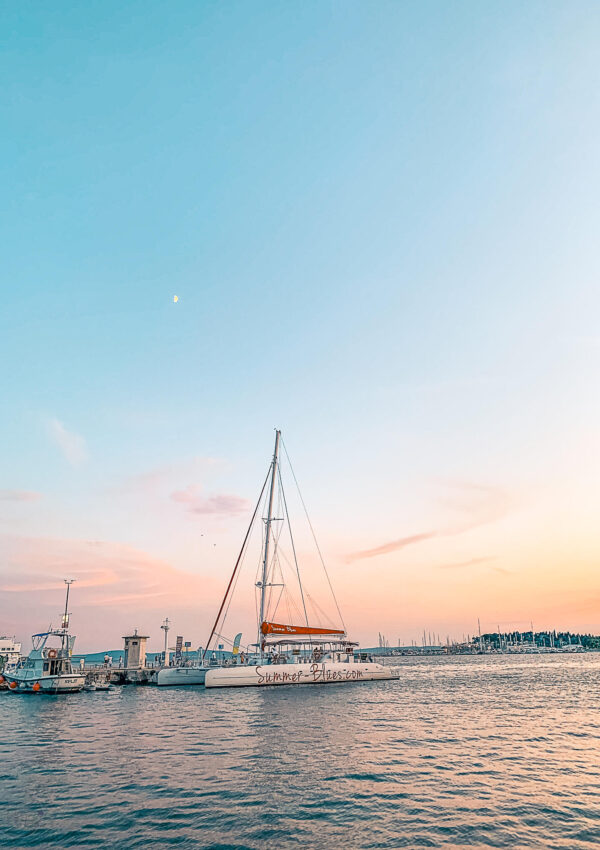 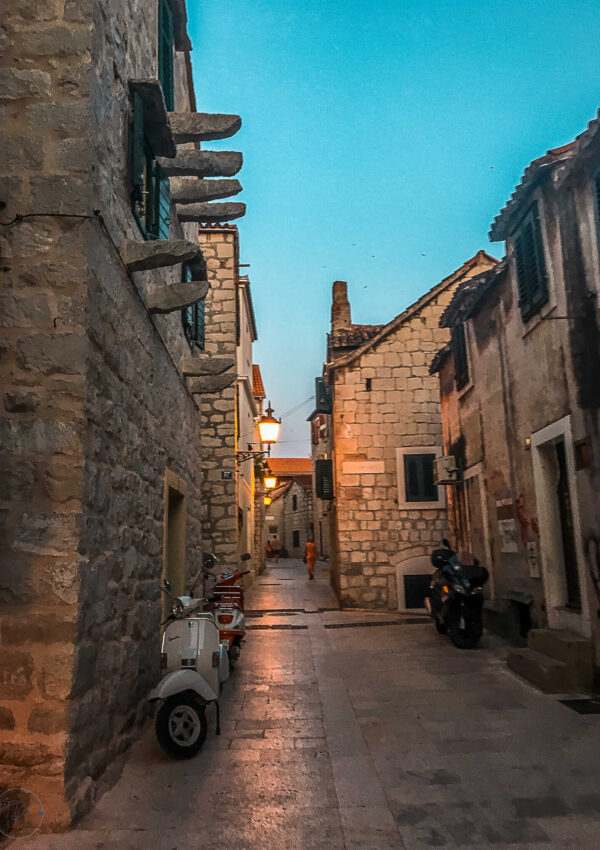 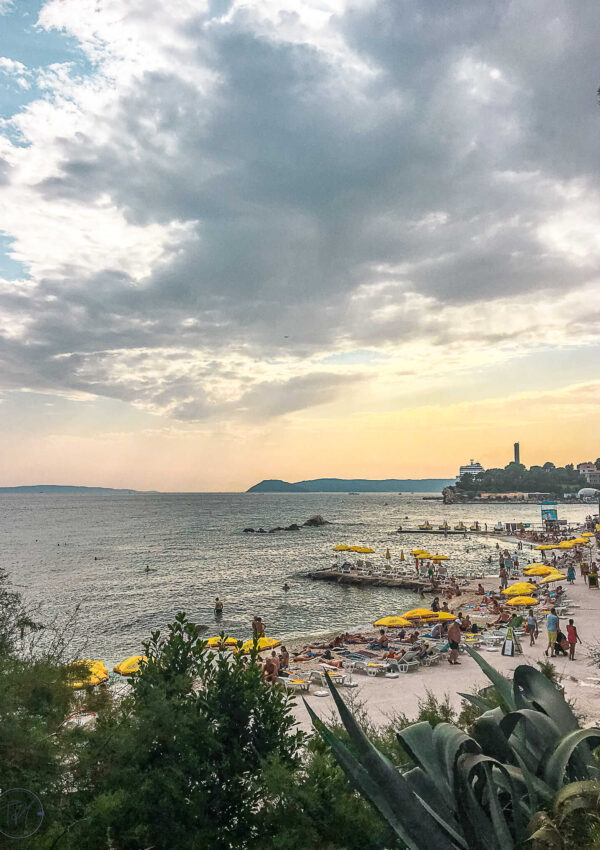 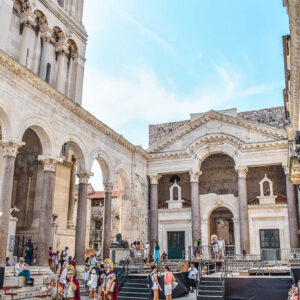